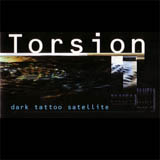 ABOUT TORSION:
Torsion is a collaboration between Olivier Moreau (Imminent) and John Sellekaers (Xingu Hill). Two years later, this album was followed by a 12" vinyl on Hymen: Jackson's Private Zoo. They're also working together on the Ambre, Urawa and Myrza projects.